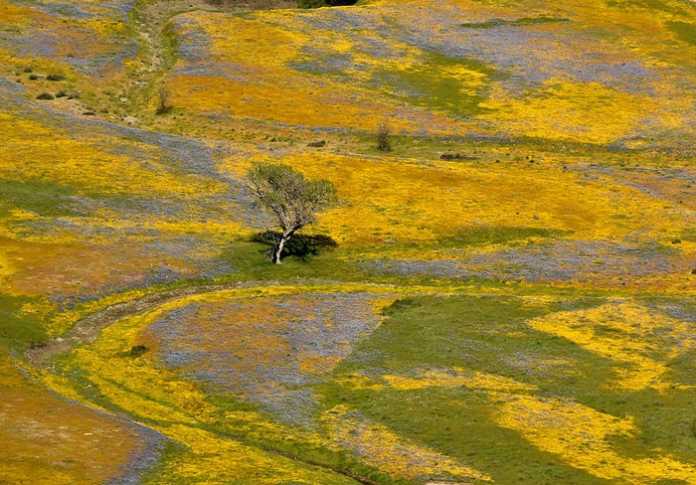 Wildflowers blooming on Army base

JOLON — California’s wildflower “super bloom” has made its way to Fort Hunter Liggett (FHL), which shared aerial photos of the colorful spectacle last Thursday on its social media platforms.

Taken from a helicopter, the photos show the vibrant colors of the wildflowers growing on the Army base in Jolon.

“You can’t beat the views on a crisp, clear day from a helicopter,” FHL officials wrote in a Facebook post April 11. “Wildflowers are especially abundant in areas of FHL that burned last summer.”

Comments and “likes” quickly poured in on the post, which has been shared 38 times on the website.

“This has been the most spectacular year for flowers at FHL that I’ve seen since I started working here almost 20 years ago,” commented Jackie Hancock, a wildlife biologist at Fort Hunter Liggett. “I’m so stoked you got these incredible aerial shots!”

Another comment came from Grace Borzini, who wrote, “I was born and raised here and have never seen such a spectacular show of Mother Nature and her glorious wildflowers.”

Wildflowers are blossoming around California this spring due to a combination of recent rains and favorable temperatures in the area. Pinnacles National Park has also reported an abundance of wildflowers this year at the park, located east of Soledad.