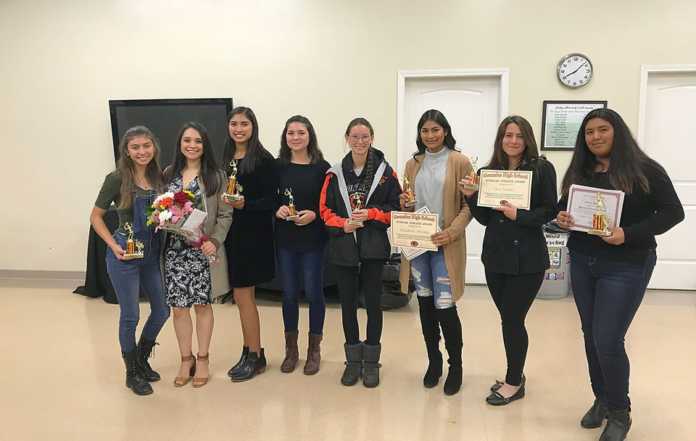 Magallon, a 2009 Gonzales High graduate, shared her experiences with the players as a student at Gonzales, Sacramento State University, and her work as a news anchor for Telemundo 23.

“Speaking to youth, especially those growing up where I did, is very important to me,” Magallon said. “Gonzales is a small town filled with opportunities, but also a place where many, like I was, are too shy to ask questions or not informed enough to go out and take those opportunities. I spoke to the students about the mistakes I made and what I learned as a high school and college student as a great way to guide other generations. It’s also a way to show them their goals and dreams are possible.”

Magallon described her time as a student-athlete at Gonzales High and how sports taught her to be a better person and teammate.

“Sports played a huge role in my life as a high school student,” she said. “They helped keep me on track in terms of grades and discipline. They taught me what effort and dedication gets you and they helped me create long lasting friendships. I played basketball and softball in high school, but in college I joined an intramural soccer team. Like high school this team became a family away from home. I still keep athletic activities in my life. My 4-year-old son loves biking, taekwondo, playing basketball and soccer with his father and I. Those activities help keep us united and healthy. My message to the tennis players was, getting to where you want to be, in most cases, requires sacrifices and dedication. I shared some of the sacrifices I had to make to get into the very competitive field of broadcasting. I felt many of the tennis team could relate since I graduated from Gonzales, played sports, and was a first-generation college student.”

After the inspiring words of wisdom by Magallon, the players enjoyed dinner, followed by an awards presentation. All the players received school athletic certificates and pins and were introduced by head coach Rene Mendez.

GONZALES — With a win over Oakwood and a loss to Watsonville, the Gonzales High School girls tennis team completed the regular season with...
Read more