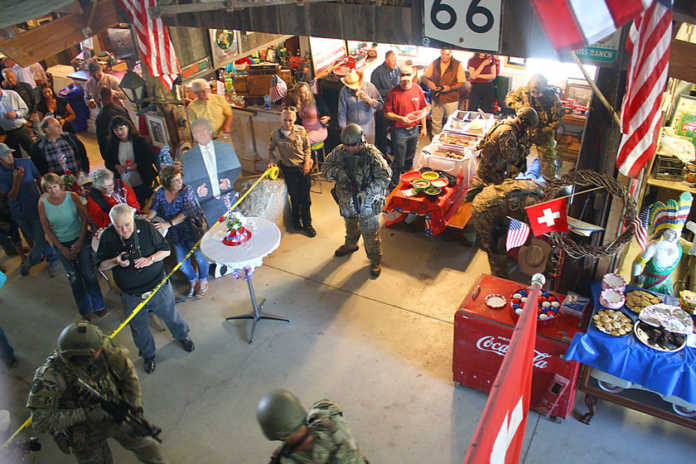 The dinner took place June 22 at the Braga Barn in Soledad as a fundraiser for the Sheriff’s Advisory Council, which, according to Sheriff Steve Bernal, was started in 1984 by Matt Gaber, Donald Sagehand and Roger Williams.

“Every year we are given a budget by the Board of Supervisors, which is enough to get us through wages and the day-to-day operations,” Bernal said. “To buy the necessary equipment we need to do our job, the Sheriff’s Advisory Council has been a very big supportive benefactor of ours.”

The Sheriff’s Office offers an explorer’s program, which current Sheriff’s Deputy Juan Herrejon was a part of.

Herrejon grew up in foster care and started getting into trouble until one day he ran into a Monterey County Sheriff’s Deputy who asked him if this was the road he wanted to go down.

“From that day on, I began to really focus on everything the program has to offer,” Herrejon said. “I was able to change my life around and it kept me on track.”

Herrejon graduated from high school with the most community service hours out of his entire class. He graduated from college with a bachelor’s degree in criminal justice and applied for the Sheriff’s Office and was hired.

The Strolling Dinner also included a SWAT team demonstration, in which SWAT team members went into a building, identified three threats and restrained those subjects and removed them from the building.

The bomb-sniffing dog also made an appearance as part of a demonstration with his handler to sniff out dangerous substances.