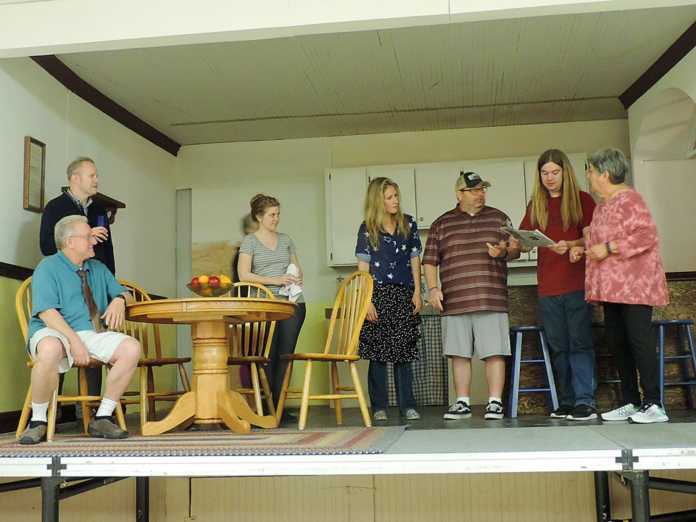 BY DAVID NORUM
FOR GONZALES TRIBUNE

SOUTH COUNTY — Ya’ll best be fixin’ to get all gussied up in your fancy pants and wander over yonder to see The Stage Hands next Supper Show, “Southern Fried Funeral,” by Osborne and Epps, opening Feb. 23. It’s guaranteed to dill your pickle with some rip-roarin’ down-home humor and fill your gullet with some tasty vittles.

Dewey Frye is dead and the rest of his kinfolk are left to pick up the pieces, that is if they don’t kill each other first. Funerals bring out the best, the worst and the funniest in families — and the Fryes are no exception. With a grieving widow, feuding siblings, an old flame, some busybody friends and a despicable uncle, they make the best of a bad situation and will bring ya’ll some belly laughs.

Director Lincoln Hatch and a terrific cast of Stage Hands veterans and young’uns will bring this show to life. Cindi Reeve, Eileen Bennett, Frank Girard and David Norum have been entertaining since some of the rest of the cast was knee high to grasshopper.

Supper will be cooked by Janene Norum, to the delight of all ya’ll, and she promises to make your belly happier than a pig in a mud hole.

“Southern Fried Funeral” will be presented at St. Mark’s Episcopal Church Guild Hall on the corner of Third and Basset streets in King City.

Tickets are available by calling 385-5061, or just pick up a whole heap of ’em at Robert Cullen Farmers Insurance, 121 N. Vanderhurst Ave. in King City.