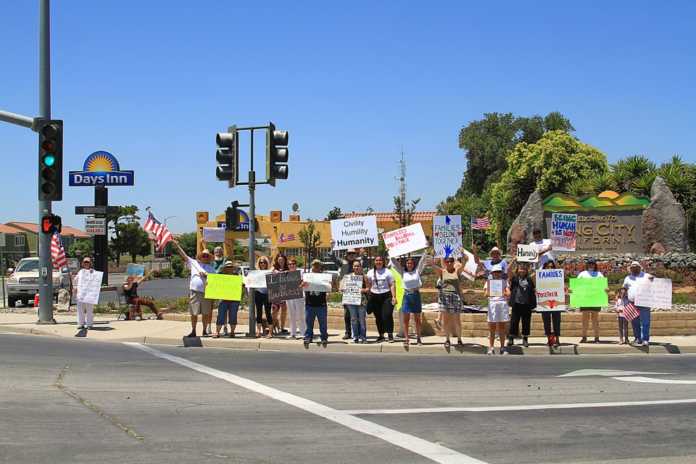 Photo by Sean Roney
Local residents gather June 30 at the corner of Broadway Street and San Antonio Drive in King City to call for immigration policy reforms. The group was part of the Families Belong Together protest, which held protests across the country.

The South County gathering in King City and later in Greenfield on June 30 was part of a nationwide outcry. It was organized by Lockwood activist Susan Raycraft with help from her INDIVISIBLE group, which meets weekly to discuss positive ways people can work together to improve public life, locally and nationally.

It was the intention of those who gathered in South County, as well as those who marched in more than 750 towns and cities across the country, to call attention to the reality that while the president signed an executive order June 20 ending the official policy of breaking apart families, more than 2,000 children remain separated from their parents, who struggle to find them.

“The ‘zero tolerance’ for refugees seeking asylum and compassion at the border with Mexico continues,” Raycraft said. “Families continue to suffer in the name of a false security threat they do not pose.”

Those who drove by the gathering were given a handout in English and Spanish explaining how to contact local elected representatives urging them to support the “Keep Families Together Act” introduced on June 7, SB 3036.

For more information about this subject, email Raycraft at [email protected] or call 831-214-2732.