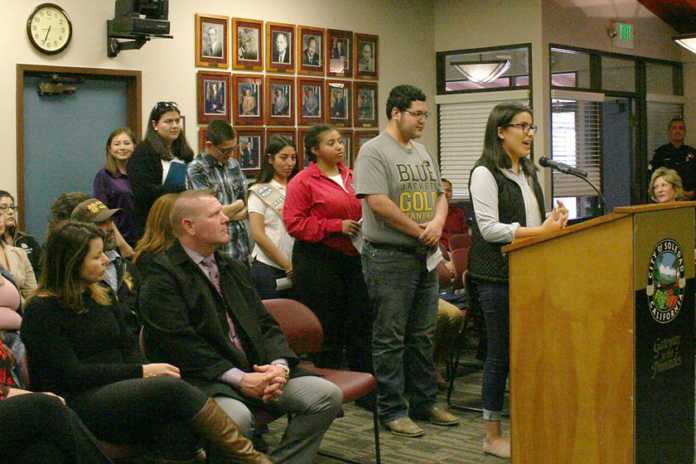 SOLEDAD — Soledad youth are interested in developing a local youth council and shared their views to the Soledad City Council on April 3.

Several Soledad High School students involved in various high school activities have been working with Gonzales Youth Commissioners Nayeli Gomez and Cindy Aguilar to learn more about starting a youth council in Soledad. Along with their support, Gomez and Aguilar also held a workshop with the Soledad youth to talk about what they are doing in Gonzales.

“I personally have been very positively influenced by the Gonzales Youth Council,” Gomez said. “Being part of the youth council has made me fall so deeply in love with the community in Gonzales.”

Gomez realized how much the community cares about its youth, and if a youth council in Soledad was supported, she said more young people would be actively engaged in their community and make a positive difference.

Soledad High student Aaron Arriaga was among the youth representatives who presented a few ideas that Gonzales Youth Council has done that Soledad would like to be part of, such as the plastic straws ban.

“We have 11 youth members here,” Arriaga said. “I think we need to educate our youth in local government and to help empower their voices to make a change.”

The youth advocates said students need a platform to voice their ideas and become future leaders as well as innovative thinkers.

“The future is now and Soledad has a huge opportunity in continuing to invest in our youth,” student Bryanna Harrell said. “We, the youth of Soledad, are committed to empowering ourselves through a Soledad Youth Council. That will provide leadership development while actively engaging us in our community government by being part of the decision-making process and creating policies that affect our youth and community.”

According to student Diana Mendoza, the goal of the youth council would be to strengthen the relationship between the youth and local government and to provide quality resources for the students to further their education and mental health.

“Lastly, we seek to create a more environment-friendly Soledad that is well informed on sustainability,” Mendoza said.

The youth representatives gave the City Council members their proposal for the youth council and were encouraged to attend the strategic planning council meeting scheduled for today, April 10, at 6 p.m. at the City of Soledad.

“We would love this opportunity,” Mayor Pro-Tem Alejandro Chavez said. “I think it’s something that’s been talked about for probably eight years. It’s great to see that the youth, on their own, are rising and doing it.”