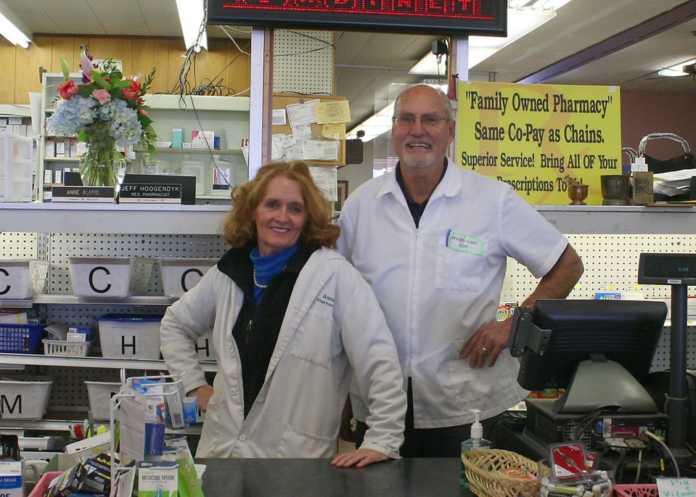 Soledad Pharmacy to close after more than a century

SOLEDAD — Soledad Pharmacy, a staple business in Soledad, is set to close this month after about 110 years. The pharmacy will be merging patient files with CVS Pharmacy in the Soledad Mission Shopping Center.

“We are so grateful for your patronage and friendship over the last 30 years,” said Pharmacist Anne Trebino. “Jan. 15, 2019, will be our last day.”

Trebino and Pharmacist Jeff Hoogendyk took over Soledad Pharmacy in 1989 from Jack Franscioni, who ran the pharmacy for 40 years prior to them taking over.

Since 1989, Soledad Pharmacy has been supporting the community by providing scholarships to high school seniors and supporting 4-H and FFA projects, chicken and swiss sausage barbecues, Girl Scouts and more. They were also part of the Soledad Chamber of Commerce.

Trebino and Hoogendyk gave a lot of thought and consideration before coming to the decision to retire from the business after 30 years.

Inside the Soledad Pharmacy, there is a tribute to all the years that it was a drug store or pharmacy in town made by the Soledad Historical Society. The first drug store mentioned was founded in May 1901. Eight years later there is a second mention of the drug store under the operation of Elmer Wiley Bingaman, MD. He sold the store two years later to H.S. Schumann.

In 1915, there was a fire that burned down the store located in the 500 block of Front Street. The current building at 547 Front St. was chosen in 1958, when Franscioni moved the business to that location.

“I came to Soledad when I was 4 years old and I remember the pharmacist and the American Tale and other stores,” said Yolanda Castillo, Soledad resident. “I met Mr. Peverini and it was such a beautiful time back then because you didn’t have to fear for anybody. The pharmacy is still the same as it was before, and it’s such a beautiful place to come and buy a gift.”

Soledad Pharmacy is currently in the process of closing and narrowing down its inventory, but it will remain open until Tuesday, Jan. 15.