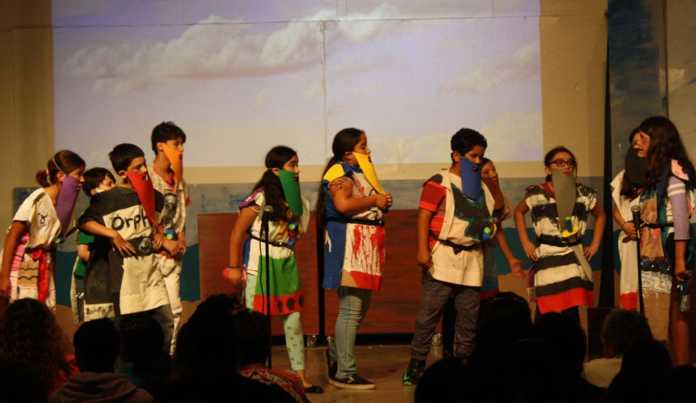 Photos by Samantha Bengtson
The beards get visited by the King’s messenger during the Summer Theatre Camp’s production called “Pirates.”

GONZALES — With only a few weeks of summer left, students of the Summer Theatre Camp presented a production called “Pirates.”

Several Gonzales youth took to the stage in the Gonzales High School choir room and presented a play about pirates, the Queen of Pronouns and more.

Magaly Santos, 14, played Interrogative Ruth, a pirate, and joined the theater program two years ago when she was an eighth grader with “Annie.” Santos continued performing in plays such as “Willy Wonka” and most recently the “Pirates” play.

“I really enjoy acting. It’s just one of my hobbies,” Santos said. “We worked so hard on the set, and our costumes.”

Arysa Sandoval, 12, was a pirate and Captain Comma in the “Pirates” play. Sandoval’s favorite part of the play was the ending with the song “Can’t Stop the Feeling” by Justin Timberlake. She was joined in the play by sister Alyssa, who played the King of the High Seas and also enjoyed the final scene because it brought all the cast together to do a song.

Ernesto Santos, 11, took the stage as Blue Beard, a pirate, and was interested in the Summer Theatre Camp because he likes drama.

“My favorite part of the play was going off stage with the rope around us,” said Julian Brandt, 8, who played Imperative and Official Number 2.

The cast of “Pirates” all played multiple characters throughout the play, such as Danielle Mendez, who played a princess, a beard and pirate. Ximena Santos also played a princess and was interested in the theatre project because she was part of the “Willy Wonka” cast and wanted to be part of a production again.

The director of “Pirates” was Cybele Foraker, and the musical director was Emily Rios.