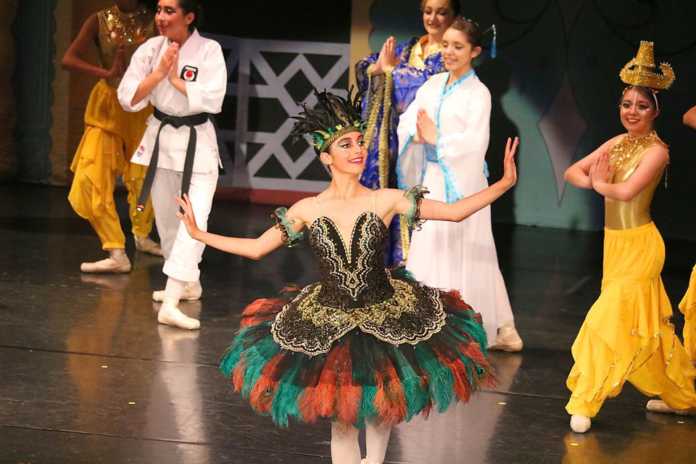 Presented by Monterey County Dance Theatre and Monterey County Dance Foundation, “The Nightingale” — based on Hans Christian Andersen’s fairy tale of the same name — featured an original ballet score composed by music educator Steve Ettinger. The ballet was choreographed by Artistic Director Janette Harkness and performed by more than 80 local dance students in the company.

Monterey County Pops! orchestra, under the direction of Carl Christensen, played the symphony for the April 12-14 performances of the two-act ballet.

“‘The Nightingale’ went extremely well with so many moving pieces and collaborations,” said Harkness, who admitted the show was “mentally exhausting” for her to get to the finish line as choreographer and director. “Steve Ettinger, the composer, and Carl Christensen, the conductor of the Monterey Pops, were still fine-tuning music on opening night of the original score. Mayra Salas, the tech manager and assistant stage manager, was still fine-tuning special effects, like the Chauvet Geyser (fog machine) used in the demons scene, on the day we closed.”

“The Nightingale,” the first ballet written specifically for the South County community, took nearly two years to come to fruition.

“When Steve Ettinger approached me (in July 2017) with the honor of composing a ballet for me, I did not hesitate a second in acceptance with a resounding ‘yes,’” Harkness recalled. “What an honor for the students of Monterey County Dance Theatre and our community to be part of something so very unique and special.”

Harkness and Ettinger decided upon a story-based ballet that the young members of the student dance company could portray on stage, eventually selecting Andersen’s fairy tale as the springboard for creating the show.

“When I started writing the music for the ballet, the first thing that came to my mind was the sound of the flute. I thought this would correspond well to the sound of a nightingale’s song,” Ettinger said. “There has long been a connection between flutes and birdsong — it is a connection that is part of many different cultures, including Native American and many European cultures.”

By making the “Nightingale” story themed in the power of music and love, Harkness said it was an “easy reach to incorporate dance as part of the story picture.”

The ballet featured both new and enhanced characters from Andersen’s original story about an emperor who prefers the tinkling of a bejeweled mechanical bird to the song of a real nightingale. When the emperor is near death, however, the nightingale’s song restores his health.

At just 12 years old, Ashley Madrid of King City danced the titular role in “The Nightingale.” Madrid has been dancing since age 3 and was recently accepted to study at American Ballet Theatre as well as the Bolshoi Ballet Academy this summer.

Other show leads included 15-year-old Elizabeth Pantoja of Soledad, who played the comical villain “The Music Master,” and 17-year-old Kayla Ettinger of King City, daughter of the production’s composer, who danced as “The Royal Chambermaid.” Local character actor Steve Wilson played “The Emperor” and 12-year-old Chloe Arriaga of Soledad performed as “The Runaway Slave.”

All the dancers study at Monterey County Dance Theatre in King City and attend local schools from Salinas to San Ardo as well as Bitterwater and Lockwood. The student company’s average age is 9-and-a-half years old.

Soledad Pharmacy to close after more than a century