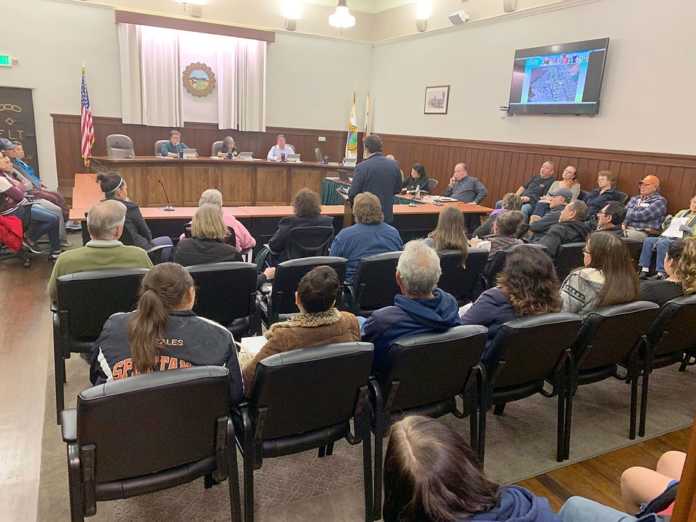 GONZALES — Residents are concerned over the change to the empty lot on Fifth Street from a designated area for a future community center to possibly CHISPA housing, which is currently under consideration.

The three-acre lot across from Gonzales High School and adjacent to Fairview Middle School was originally earmarked for a community center, according to the City of Gonzales’ General Plan. However, the plan was modified by the city council through resolutions made in April and October of 2017.

“These resolutions directed staff to coordinate with CHISPA in preparing an agreement leading to funding and construction of affordable housing,” said Matthew Sundt, community development director. “And, to approve an exclusive contract between CHISPA and the City with regard to the property to include affordable multi-family housing.”

On Jan. 23, the Planning Commission considered a conditional use permit to construct 41 residential apartment units in the area and have an area designated for a future city library. The apartments would consist of six two-story buildings with a height of 28 feet.

The apartments would have two- to three-bedroom units, and 106 parking spots are proposed for the housing complex.

The City is hiring a company to staff crossing guards on either side of the Fifth Street bridge for one hour in the morning and afternoon during the school year.

“The City is working with Cal Trans to re-stripe the bridge to accommodate four lanes,” Sundt said. “Combined, these measures will reduce delays on Fifth Street and provide significant relief to drivers for existing conditions.”

“We’re really certain that the way we do marketing, we’ll have anywhere from 85 to 90 percent of the units go to Gonzales residents,” he said.

Planning Commissioner Tim Jackson expressed concerns about the safety of residents who are walking to school, the traffic and how there needs to be a school on the other side of town.

“We have probably outgrown our infrastructure and we need to create better infrastructure,” Jackson said. “I love your project, but I just think it needs to be someplace else.”

Resident Roman Barba was concerned there wasn’t enough parking spaces in the plan and the overflow would go onto Rincon Road. Another resident, Carol Karen Piffero, said she was against the project.

“It takes me 10 minutes at least in a normal day to get to my parents’ house, which should take two minutes,” Piffero said.

The Planning Commission voted to deny the housing’s conditional use permit.