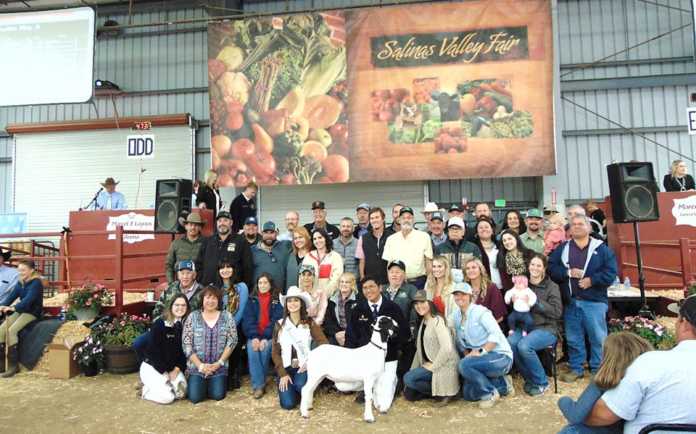 SOUTH COUNTY — For the first time, Salinas Valley Fair auctioned off a market goat — raised by Ivan Trujillo of Greenfield High School FFA — as the Heritage Foundation Scholarship animal for nearly $1,385 per pound, resulting in a total of $108,000 raised.

Salinas Valley Fair Heritage Foundation selects one student every year to raise the scholarship animal. The student receives a scholarship for college, and the foundation pays all the expenses related to raising the animal in exchange for auctioning it off at the fair.

Funds raised are then turned around and used for such projects as improving the barns that the 4-H and FFA members use to house their animals during the fair. The next project is building a new heritage room.

Trujillo is a junior at Greenfield High and was chosen as this year’s Heritage Scholarship winner back in December.

“Getting the Heritage Scholarship really means a lot to me. Coming from a past line of agriculturists, I really just found a lot of interest and passion for the agriculture industry,” Trujillo said. “By receiving this honor and privilege, raising the Heritage animal really opened up so many doors for me, as I really want to fulfill my journey and become an agricultural teacher.”

Trujillo’s goat is named Bucky and weighed in at 78 pounds. Deciding to raise a goat was unusual in that they aren’t known to raise a lot of funds, but Trujillo said that he raises them from the heart and not because of what profit they can get.

“Thank you to the Salinas Valley Fair Heritage Foundation as well as my three advisers and two of my student teachers for being my main support system for this animal,” Trujillo said.

Along with goats, 4-H and FFA members showed swine, sheep, beef and rabbits at the fair. This year chickens were absent due to an outbreak of a contagious poultry disease.

Morgan Mansfield, from Mission 4-H, chose to bring her first pig to the Salinas Valley Fair.

“It was pretty cool to show a pig, a lot easier than I thought it would be,” Mansfield said. “I chose to raise swine to raise money for high school. I’m planning to go to Notre Dame High School.”

Mansfield is an eighth-grade student currently and plans to continue raising animals next year.

“Usually I don’t do anything like this,” Falcon said. “It was a good experience. I like being with my pig. It kind of hurts that it’s over already.”

Falcon, a senior, raised his first pig this year. He wished that he would have known about showing an animal sooner that way he could have participated all four years.

“Getting weight champion means a lot to me, it means that I got something good,” Cuevas said. “I enjoyed this fair, spending time with my family and friends and also the rides.”

“It means a lot because I put a lot of work into this every day,” Benny Cuevas said. “I think showing animals at the fair is good way to have responsibilities that you can use in the real world.”

Priscilla Flores of Gonzales FFA showed a lamb this year. Flores was told that lambs were easy but said hers was a little bit stubborn. She is a senior this year and wanted to encourage anyone who is thinking about showing animals to try it and see what happens.

“They look pretty cute, so I decided to get a lamb,” Flores said. “I wanted to show an animal my freshman year, but I didn’t turn in the paper. How it works at my school is you have to be in an ag class.”

Alexandra Flores, also from Gonzales FFA, chose to bring a lamb too. She named her lamb “Hot Dog.”

“I wasn’t really into agriculture any of my years of high school, but I was placed in a floral class and there was an announcement to raise an animal,” Alexandra Flores said.

Aaron Arriaga, from Soledad FFA, brought a lamb to the fair as well. Arriaga named his lamb “Lucky.”

“The reason I started raising livestock was the fact that I really enjoyed the agricultural industry and I wanted to get a deeper look on what actually happens and what needs to get done for the industry to flow correctly,” Arriaga explained. “A fun fact that I learned while raising livestock is the oil that comes off of the lambs is called lanolin, and they use it in rich cream companies to moisturize skin.”

Junissa Guillen, also from Soledad FFA, raised a pig for the fair to experience new things during her high school career and because she wanted to do something to help her agricultural career. Guillen named her pig “Stella.”

Fellow Soledad FFA member Esmeralda Garcia also chose to raise a lamb because she wanted to have the experience of raising an animal. Garcia is a junior and wants to raise an animal again next year.

“When I was coming up with a name for my lamb, I wanted a special name that was cute but not that one anyone had,” Garcia said. “So I came up with ‘Ohio.’”

This year’s livestock auction, which raised a total of more than $2.2 million, was dedicated to brothers David and Steven Gill, agricultural businessmen who have supported the local community and youth.

MONTEREY COUNTY — Monterey County Office of Education announced Thursday that most of the county’s school districts and charter schools are not anticipating to reopen...
Read more
Local News

SALINAS VALLEY — A slew of events, meetings, programs and services from around Salinas Valley have either been canceled or postponed in...
Read more

Staff Report | March 27, 2020
MONTEREY COUNTY — Monterey County Board of Supervisors has approved $250,000 in support for the Food Bank for Monterey County, officials announced...

Monterey County schools extend closure until May 4 due to ongoing...