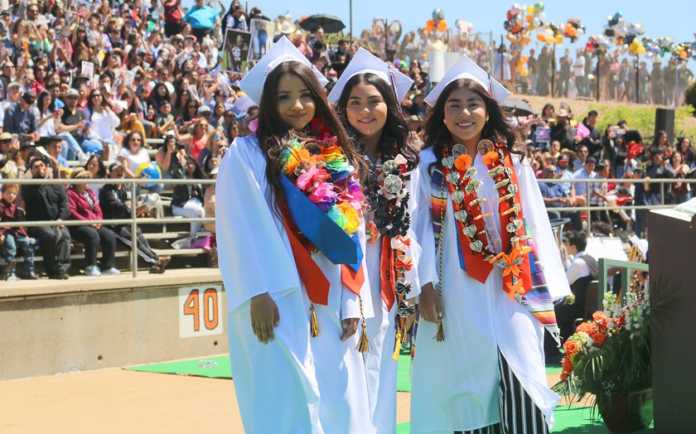 GONZALES — One of the warmest days of the year was the perfect setting at Saturday’s 109th Annual Commencement for Gonzales High School at Dick Force Stadium. Nearly 200 graduates donned their gowns and mortar boards to celebrate the event with family, friends, school staff and alumni.

“This has been an exceptional year, a year of outstanding performances,” said Gonzales High Principal Julius Purnsley. “A year that showed not only us, but the whole city, valley, county, state and even the country that yes, not only can you make it from Gonzales High School, but it can be done at championship levels.”

Purnsley praised the achievement of the Spartan MESA team and Jazz and Marching bands receiving county honors, the Broadcasting Team that took third place in the Skills USA Broadcasting competition and the Spartan Agriculture program for being ranked 13th in the State of California. Gonzales also sent a student to Washington for the Hearst U.S. Senate Youth Program.

On the athletic fields, Gonzales High had great efforts and won championship titles this school year.

Seniors Kayla Dixon and Jacqueline Hernandez then took the stage and presented flowers to Senior Class Adviser Eva Lopez for her hard work in planning the class events this year.

Salutatorian Cindy Aguilar-Castaneda then walked to the podium to talk about her school experiences and many hours of work as youth commissioner for the City of Gonzales.

“I regret to inform you all that my high school experience was nothing like the ‘High School Musical’ movies 1 ,2, 3 and 4,” said Aguilar-Castaneda. “Rather, it was the time in which I thought that taking nine college units on top of my high school courses was the great thing to do. I decided that taking Jazz classes at 6:30 in the morning was a great way to feel ‘productive.’ It was also at this time that I discovered by voice and passion for community service. I am thankful to the Gonzales Unified School District, the Gonzales Board of Education, the Gonzales City Council, everyone at City Hall and anyone that has ever given me a ride, words of advice or words of encouragement.”

Aguilar-Castaneda was recognized recently by the City of Gonzales for serving four years on the Youth Council. She will be attending the University of California at Berkeley in the fall.

The Class of 2019 valedictorian Jesus Trujillo, a resident of Chualar, enjoyed his time as a student and as an athlete on the Spartan teams and will be attending UC Davis in the fall.

“In my four years in high school, I played as a wing and forward on the soccer team, I participated on the debate team and joined track and field,” Trujillo said. “I took advanced classes, took 13 classes at Hartnell, among other things. To fulfill my goals I had to work hard. At 14, I got into the fields, and I spent a summer working, fixing hoses. Since then I have worked my summers, Saturdays, and any free time I have. I’ve worked at my house, the strawberries, in the cauliflower, landscaping and in a little store in Gonzales, and right now I am working in a broccoli crew.”

Trujillo publicly thanked his friend Dylan for being like a brother and his longtime girlfriend Priscilla Flores and his many friends from Chualar. Trujillo then thanked his immediate family for their support.

“I’m going to thank my family, including my sister who has been a very good example,” he said. “My mom has always helped me, and been my best example and supported me in my decisions. Even though she kills herself in the fields, I’ve never heard her complain in front of us. If she had the same opportunities as me, I think she would have done up to twice as much as me. If it were not for all these people and their support, they would not have accepted me into so many universities.”

View more photos in the South County Graduation Section in the June 12 issue.