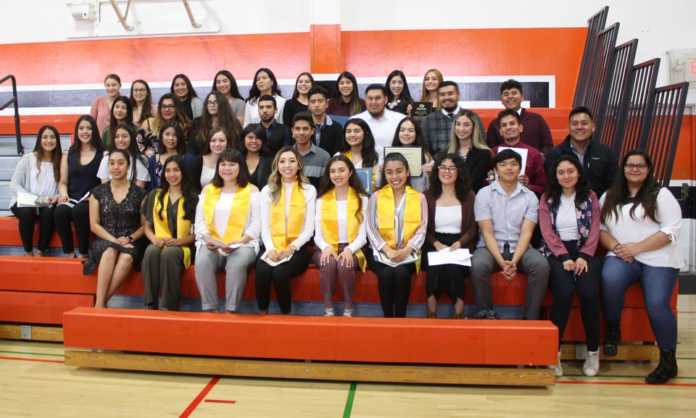 GONZALES — About $130,000 was given out to Gonzales High School graduates from various community organizations during the annual Senior Awards Night on May 23 in the Roger D. Fernando Gymnasium.

Senior Veronica Guiterrez-Delgado was selected to receive the “Pay It Forward” Scholarship for $20,000 while attending California State University Monterey Bay. The program has built-in commitment, accountability, excellence and graciousness into the program and instills those qualities into the students throughout the four years as they go through the program and mentor younger students.

“The Santa Lucia Masonic Lodge No. 302 of King City has been active in supporting South County schools for 127 years,” said Ferguson. “This is the first year we’re in Gonzales. I don’t know why it took us so long.”

Morales was awarded $500 from the Lodge.

“As much as he struggles he still managed to maintain better than a 3.5 grade point average and he takes care of his mom,” said Ferguson.

The scholarships awarded last Wednesday evening were also based on leadership, such as Associated Student Body (ASB) Leadership.

“It has been tradition for us to give a scholarship to a student that has been in ASB for four years,” said Michelle Rodriguez. “The student that I have chosen has been with me for three years and one year with Ms. Hillard. She has been through thick and thin with me. She is a wonderful leader.”

The Gonzales Unified School District got in on the scholarship action and gave out six scholarships this year.

“The School Board gets a small stipend after every meeting that we attend and we as a group elect not to take the money,” said School Board Trustee Wendy Franscioni. “We use it for various projects throughout the year, including these scholarships or to help a student go to Washington, D.C. So all the money goes back to our students.”

Six scholarships for $500 each were given to Katrina Cervantes, Emilia Contreras, Jacqueline Madrigal-Espinoza, Nick Morales, Fabiola Moreno and Jacqueline Trujillo.

Students were also given their California Scholarship Federation sashes, the National Honors Society sashes, the academic “G” that goes on their Letterman Jacket and the top two students in the class were announced.

This year’s Salutatorian is Jacqueline Trujillo and Valedictorian is Katrina Cervantes.

***An earlier version of this story had an incorrect scholarship amount for Nick Morales.