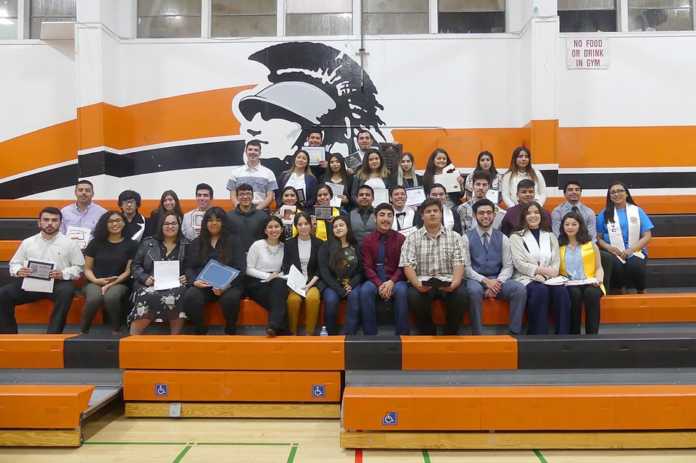 GONZALES — The graduating Class of 2019 earned a half-million dollars in scholarships during the annual Gonzales High School Senior Awards Night May 30.

“The scholarships and awards presented are recognitions for academic performance and for some extracurricular activities,” Principal Julius Purnsley said.

The students received scholarships and awards from various organizations, including school departments, colleges, local businesses and non-profits. At the end of the evening, Purnsley had estimated $500,000 was given out to all the graduating students.

One of the scholarships given out that evening was the Rudy Prader Firefighters Scholarship. Prader or “Speedy” was born in 1906 and lived in Gonzales until his death in 1996. He spent time with the volunteer firefighters and became a member during World War I.

To earn the Prader Scholarship, students must maintain a 3.0 GPA and show interest in the emergency field.

The second scholarship to be given out was the Duvilia H. Franscioni Memorial Scholarship presented by Wendy Franscioni. Duvilia is the mother of Wendy’s husband, and is a graduate of the San Jose Teacher’s College, now known as San Jose State University in 1934.

“She moved to the Gonzales community in 1936 and started her teaching career at La Gloria Elementary School,” Wendy said. “In honor of her dedication to public education, we are offering this scholarship to Dylan D. Cervantes.”

One of the biggest scholarships of the night was the Cal Lutheran Provost University Scholarship for $100,000 over four years. It was given to Alexandro Mendez for his academic and athletic skills.

The next scholarship, the Gates Scholarship is given out to 300 top student leaders each year with the intent of promoting their academic excellence through college graduation. The scholarship shoulders the cost of attendance that is not already paid for through financial aid or the expected family’s contribution.

“We estimate it will be about $35,000 for five years, which equals $175,000,” Purnsley said. “The winner will be attending UCLA in the fall majoring in math and mechanical engineering. It is Dylan Cervantes.”

The final big scholarship given out was the Berkeley Regents and Chancellor’s Scholarship, a full-ride scholarship that covers four years of school, excluding funds from scholarships and financial aid. It was estimated at $72,000 over four years and the recipient is Cindy Aguilar-Castaneda.