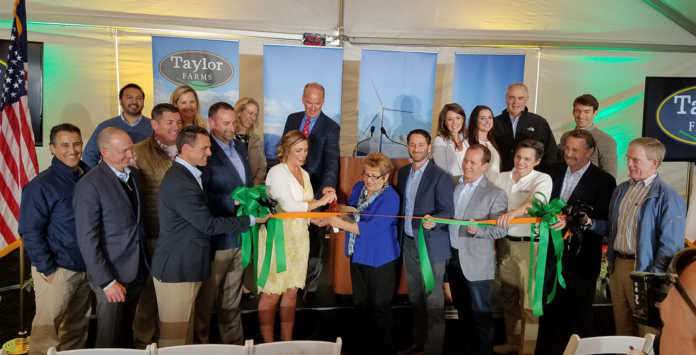 GONZALES — The City of Gonzales has long been an advocate of “green” principles. Gonzales Grows Green Initiative, better known as G3, has battled against single-use bags, held cleanup days and has led the discussion for sustainable energy in the city and surrounding areas.

The city is being recognized as a leader in promoting sustainable energy in wind and solar and how private and public partnerships can be successfully implemented to create a win-win for all parties involved, all the while utilizing resources to their fullest.

One of those businesses that has led the “green” effort is Taylor Farms, which last week held a ribbon cutting celebrating the three systems they have put in place to power their processing plant in Gonzales.

The ribbon cutting celebrated the unique energy system that harnesses wind, solar and cogeneration and the continued growth of Taylor Farms’ sustainability efforts throughout its company, where the Gonzales plant will be the template for other Taylor facilities.

Nicole Flewell, director of sustainability at Taylor Farms Gonzales, started the ceremony with introductions and words of thanks.

“This system is one of a kind, incorporating these three new technologies to work in harmony,” Flewell said. “It will make Taylor Farms Gonzales our first facility capable of generating 100 percent of its energy needs on site.”

“In terms of how we produce our healthy wholesome products, the more sustainably we can do it the better we are as a company and the better off we are as a community,” said Bruce Taylor, founder and CEO of Taylor Farms. “So that’s really what’s driving us.”

Taylor asked for a round of applause for Gonzales Mayor Maria Orozco, her staff and the city itself for being the most cooperative and “the best city to deal with, by far.”

Orozco went on to talk about Taylor Farms and its sustainable efforts.

“The Taylor plant is a leading example of how to use wind and solar powers and cleaner natural gas to reduce the carbon footprint of a major food-processing facility,” Orozco said.

Foundation Wind Power built the 1 megawatt General Electric wind turbine that was installed in November 2014. Since its installation, it has produced an annual energy offset of 16 percent. On hand to talk about their project was Bob Lewis and Kevin Hauck on the stage.

Jared Friedman talked about the 1 megawatt REC Solar array, which consists of 3,578 panels. It was installed in July 2016 with an annual energy offset of 10 percent.

Concentric Power built the natural-gas-powered cogeneration system, the latest addition to the Gonzales facility that was installed this month and is expected to produce an annual energy offset of 62 percent.

This is the first major installation of its kind for Brian Curtis, founder and CEO of Concentric Power.

With the use of natural gas and on-site energy production, this system is 21 percent cleaner than using power off the utility grid.

The combined systems generate 4.25 megawatts of energy on site, which runs the 192,000-square-foot fresh vegetable processing plant. At times, the facility will generate enough power to operate 100 percent of operation power needs, but on average the three systems will offset energy usage by more than 90 percent.