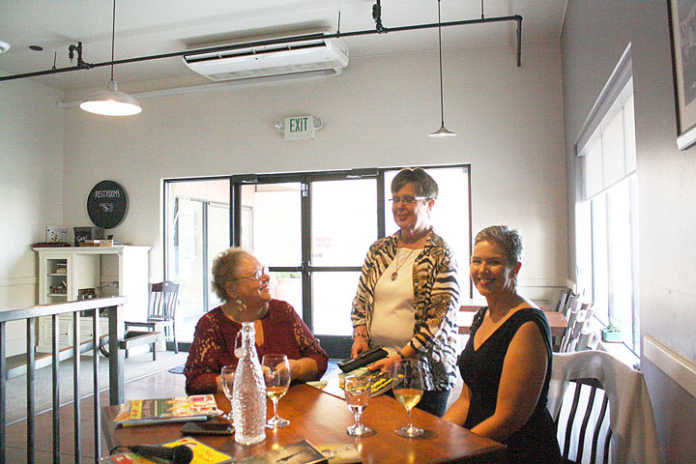 Cork and Plough welcomes authors for Books and Brews

KING CITY — The Cork and Plough hosted the Second Annual Books and Brews on Aug. 12, during which residents met two Monterey County authors, Anne Ylvisaker and Carol Diggory Shields, who read passages from their writings. The South County event is a fundraiser for the Foundation for Monterey County Free Libraries.

“Everyone was really enjoying themselves and people are smiling as they come in,” said Julia Foster, executive director for the library foundation. “It’s a great mixture of people listening to the authors talk and just having fun seeing each other.”

“It’s set during World War II and it is letters from a girl to her father,” Ylvisaker said. “He’s already passed away, but she writes to tell him about her life after he died.”

Ylvisaker has been writing for about 20 years. Prior to writing, Ylvisaker was an elementary school teacher and started writing books on subjects she had taught for children.

“I started writing when I was 39,” Shields said. “I hear an idea, like my husband would say ‘I’m really a prince’ because he felt he had been born into the wrong family. My first book is called ‘I’m Really a Princess.’”

Other ideas for stories came from her children when they would come home from school and tell her about their day. Shields also works at the Seaside branch of the Monterey County Free Libraries.

The night of the fundraiser also served as a way to honor Butch and Vivian Lindley. Vivian helped out at the Cowboy Poetry event at Sherwood Hall in the week leading up to the Rodeo. Butch aids the libraries and the foundation during the annual fall fundraiser, in which he auctions off items.

“It’s a privilege to be here and thank you for the honor of receiving this award,” Butch said. “The Free Libraries of Monterey County are something that we should all be very proud of and the support they give throughout Monterey County.”

Final weekend to see ‘Wizard of Oz’ in Gonzales