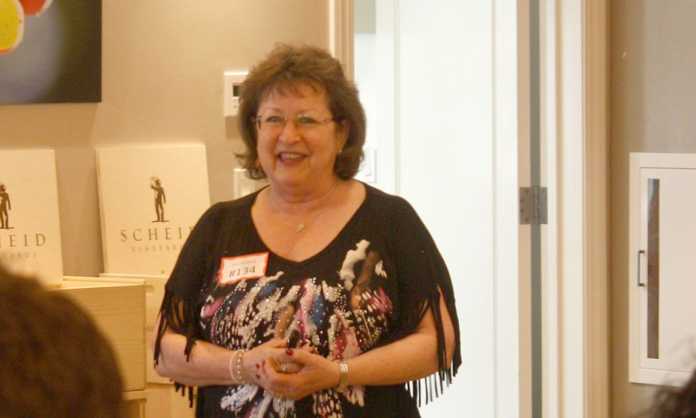 Photos by Samantha Bengtson
Roni Capin Rivera-Ashford talks about being a children’s author and how Disney asked her to write the “Coco” stories. Below, guests enjoy wine and tacos at Scheid Vineyards’ Tasting Room in Greenfield before hearing from the children’s author.

Rivera-Ashford, a children’s bilingual author, visited the Castroville Library and the Greenfield Library the day prior to the “Coco in the Vines” event on July 7 at Scheid’s Tasting Room in Greenfield. According to Library Director Jayanti Addleman, Rivera-Ashford’s stories were such a hit that her books sold out before the event last Saturday evening.

“Roni’s been very gracious, and so we took orders and made sure you got the book,” Addleman said.

Rivera-Ashford was born in New York City but grew up in Nogales, Ariz., on the border between Arizona and Mexico.

“There’s a lot of cultural mixing and diversity and inclusion, which has brought me to write the stories that I write,” Rivera-Ashford said.

Before becoming a writer, Rivera-Ashford was a first-grade and kindergarten bilingual teacher, reading teacher and translator. She wrote her first story, “My Nana’s Remedies,” when she was teaching reading to first and second graders who were having trouble learning to read.

“I decided I needed to write some stories for them that I could teach them to read in their home language,” she said. “Reading is a skill. Once you know the skill, you learn a new language, you know how to read that other language.”

Rivera-Ashford followed a program called “Reading Recovery,” developed in Australia, to write “My Nana’s Remedies.” She wrote the book in Spanish first and then adapted it to English.

Following her first book, it took Rivera-Ashford five years to publish her second book, “Hip Hip Hooray, It’s Monsoon Day.” The book is a mixture of science and culture and won “The One Book Arizona” award. Her third book took another eight years to complete with a new publisher.

“My Tata’s Remedies” won the Pura Belpre Award, a nationally recognized award named after the first bilingual librarian who came from Puerto Rico. The story also received the International Latino Book Award and the Edward James Olmos Latino Award. Because of those awards, Rivera-Ashford believes that Disney was able to see her work and enlist her to work on the “Coco” stories.

Olmos was involved in Disney’s “Coco” movie and voiced the character Chicharron.

Rivera-Ashford was asked by Disney to write another book for “Coco” about Dante the dog, which will be out in the fall and is co-written by her husband Danny.

ABOUT US
The Gonzales Tribune is a weekly paid newspaper which serves the city of Gonzales, California and surrounding Monterey County, in the Salinas Valley. At one time the largest circulating paper in the county. It was purchased in July 2019 by California publisher New SV Media, whose products also include the King City Rustler, Greenfield News, Soledad Bee, Gilroy Dispatch, Morgan Hill Times and Hollister Free Lance. It is published every Wednesday. In 2017, Ryan Cronk was named editor and he is the current managing editor.
522-B Broadway King City CA 93930
ph 831-385-4880 • fax 831-385-4799
Contact us: [email protected]om
FOLLOW US
© 2020 New SV Media, LLC. All Rights Reserved
MORE STORIES