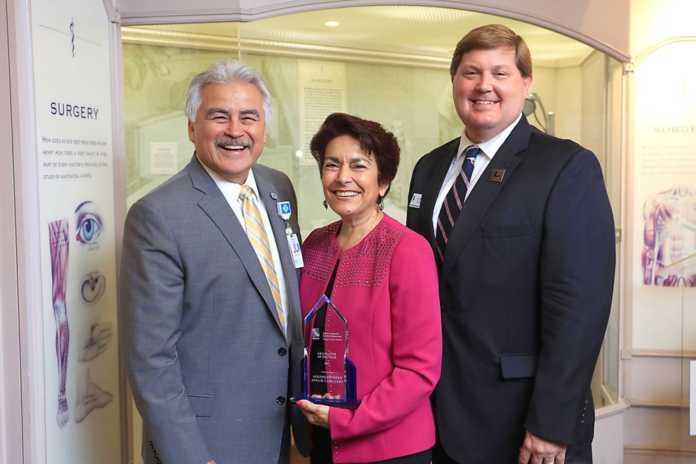 Caballero named 2017 Legislator of the Year

SALINAS — Assemblymember Anna Caballero was named the 2017 Legislator of the Year by the California Special District Association (CSDA) on March 28.

“A big hug and thank you to Salinas Valley Memorial Healthcare System,” Caballero said. “They’re a terrific, special part of the Salinas community.”

Caballero had worked with the City of Salinas before when she served as mayor as well as executive director for Partners of Peace, which received a grant from the Packard Foundation to start their work.

The group needed a fiscal agent and, according to Caballero, Salinas Valley Memorial stepped up and was there for them. The hospital made the decision to help Partners for Peace and Caballero because the doctors see the victims and thought it was important to stop gang violence in the community.

“This really was a great partnership,” Caballero said.

Caballero received her Legislator of the Year award at the Salinas Valley Memorial medical museum. She was selected for the award due to her support of special districts responsible for providing water, fire protection, health care and other essential services to communities throughout California.

Pete Delgado, president and CEO of Salinas Valley Memorial Healthcare System, said, “She’s been an ally of the Hospital District for many years and all the districts across the state.”

Salinas Valley Memorial Healthcare District is one of 73 districts throughout the state, with 43 districts represented by hospitals. The district is celebrating 65 years in existence this year.

“Assemblymember Caballero was the clear choice for CSDA’s 2017 Legislator of the Year,” said Kyle Packman, advocacy and public affairs director for CSDA. “As a member of the Assembly Local Government Committee, she has served as a voice for special districts and the communities they serve. Assemblymember Caballero also makes it a priority to foster relationships with special district leaders, so they can work together to find solutions that meet local needs and empower communities.”

Ready for the fair?