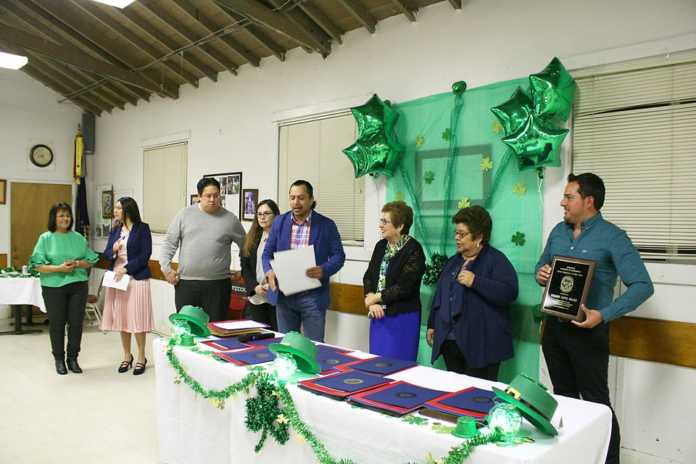 A night of honors

GONZALES — During its Annual Awards Banquet, Gonzales Chamber of Commerce honored local community members who are making the city a better place to work and live by giving back through businesses and volunteering.

Valdez Auto Sales was chosen as Business of the Year. Rutilia Baltazar of the Chamber introduced brothers Jaime and Roger Valdez, who own and operate the business.

The Valdez brothers are graduates of Gonzales High School and made the decision to bring back business to the city.

“I really appreciate what they do for the city, for the youth and for all of our events,” Baltazar said. “Every time we ask for support they’re always there to help us out.”

Jaime Valdez said bringing the auto dealership to Gonzales met skepticism, with residents coming up to them asking how they would make a car dealership profitable in Gonzales.

“We’ve been doing well,” he said. “The first year it was hard for me and my brother. We were only selling about five cars a month and now we’re selling more than 30 cars a month.”

According to Jaime, they have customers from San Diego, Oregon and Hawaii. This Friday will mark the fifth anniversary of Valdez Auto Sales and plans for a celebration are in place.

The Volunteer of the Year Award went to the Gonzales Lions Club, and accepting the award was President Minnie Torres.

One of the major focuses of the Lions Club is to help the Gonzales Community Food Pantry.

“I’m really humbled and honored to be able to receive this award for the members,” Torres said. “Our members are a really awesome group of people who do as much as they can with the timeframes they have.”

The club is also making efforts to bring glasses to students at Gonzales schools, and is planning to host the Father’s Day Breakfast again this year.

Within the Lions Club, members choose a Volunteer of the Year. This year Nora Reyes was selected.

Reyes is a charter member of the Lions and is always there to help the community. One of her passions is the Gonzales Food Pantry and most recently sold bake sale items to benefit the organization.

Although Reyes doesn’t live in Gonzales — she is from Greenfield — she still takes the time to help out a local city through the Lions Club and the Food Pantry.

Youth is not left out of the Chamber Awards, and this year two were selected. Cindy Aguilar and Nayeli Gomez are part of the Youth Council and have seats on both the Gonzales City Council and Gonzales Unified School District.

“I’m very grateful for the City of Gonzales,” Gomez said. “I don’t think the Gonzales Youth Council would be able to do everything it does without the constant and unconditional support of the City.”

Aguilar was unable to attend the Gonzales Chamber Awards because she was in Washington, D.C., representing the city and the state as part of the Senate Youth Program.

The Chamber president gives out a President’s Choice Award, which this year went to Craig Hicks.

“We have a small participation in chamber and they are very hardworking people,” Hicks said. “That’s what we need in the community. Thank you so much and I appreciate it all.”

That would not be the only award Hicks would win that night. Hicks also was named Rotarian of the Year for his commitment to the Gonzales Rotary and serving as president for many years.

The City of Gonzales also chooses an Employee of the Year, which went to Andrea Navarette.

Navarette is one of the first City staff residents see when they come into City Hall. According to City Manager Rene Mendez, Navarette always has a smile and is making sure city staff are getting recognized.

This year the City’s Recreation Department selected an Employee of the Year as well, which was awarded to Emily Rios. Rios is involved with the school district and city theatrical performances and volunteers with the after-school programs.

Sticking with the City award train, the Gonzales Police Department chose Officer Martin Rocha this year as the Officer of the Year. Rocha had the highest number of arrests made, citations given, is radar certified, recovered weapons and located an assault rifle.

Right along with the police department, Fire Chief Jason Muscio selected Sean Schmidt as Volunteer Firefighter of the Year.

“Sean, or Schmidty, joined us in September of 2014 and has quickly become a big part of the foundation of what makes the fire department,” Muscio said. “The majority of our firefighters live outside of the city.”

Schmidt represents one of the last resident firefighters who lives in Gonzales and has found a way to balance his family life while serving the fire department.

“Thank you to my wife for putting up with all the late nights,” Schmidt said. “Thank you to Jason and to the City.”

Switching gears, the school district took over the night and recognized Irene Jimenez, who works at La Gloria Elementary School.

“Thank you so much for this wonderful recognition,” Jimenez said. “I’m very blessed to work and live in this amazing community.”

Jimenez has worked for the Gonzales Unified School District for three years.